The following image gives a general overview of how data flows from the failure net into the MSR Form. As the cell for “Current System Response” is selected, it is highlighted in turquoise. This applies to the same element displayed in the failure net from which the data originates. 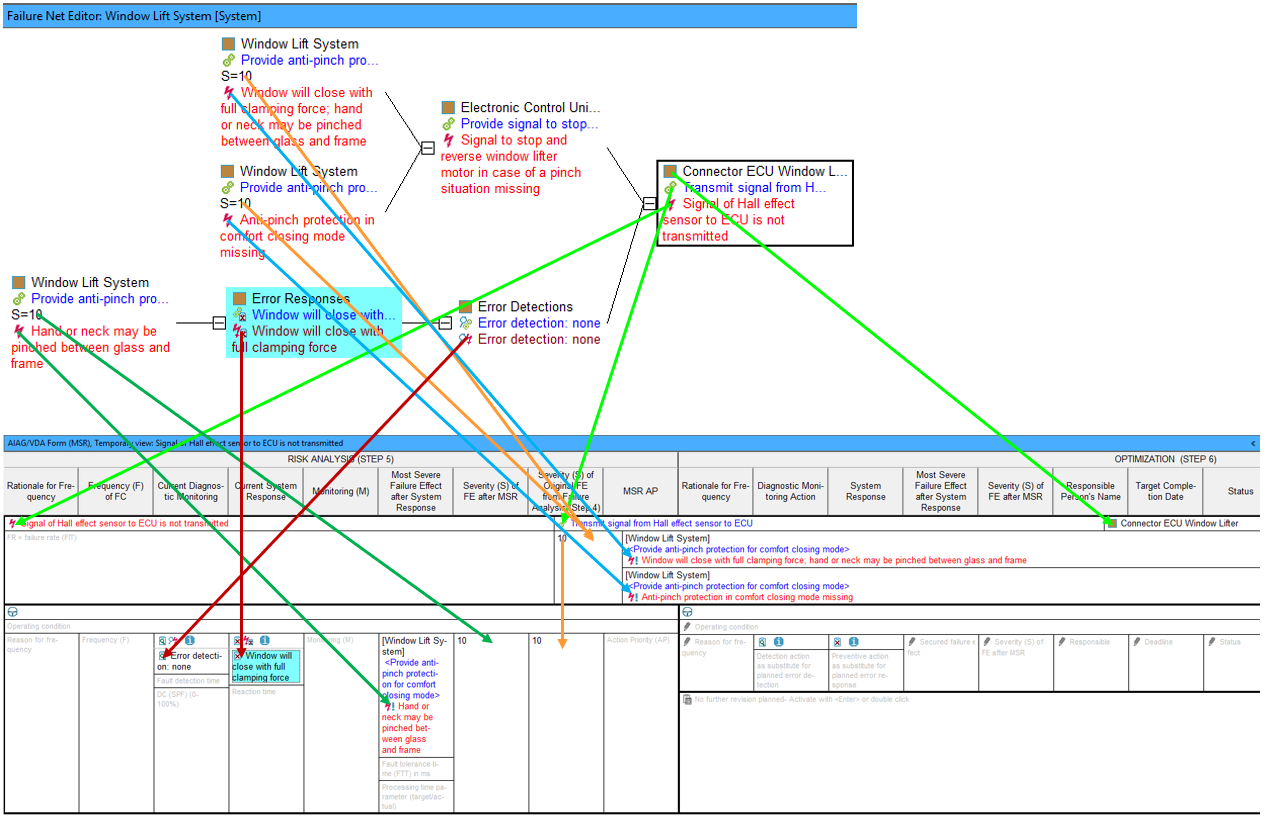 2.2 Explanation of this data flow from an existing FMEA to the MSR Form

In the selected cell “Current System Response” of the MSR Form, a safety mechanism is entered (“Error Response”).  If an FMEA with error responses linked in the failure net already exists, these error responses can be found here as well, as shown in the following image. (To achieve the same display as the image, remove “actions” in the display options of the Structure Editor and Failure Net Editor). 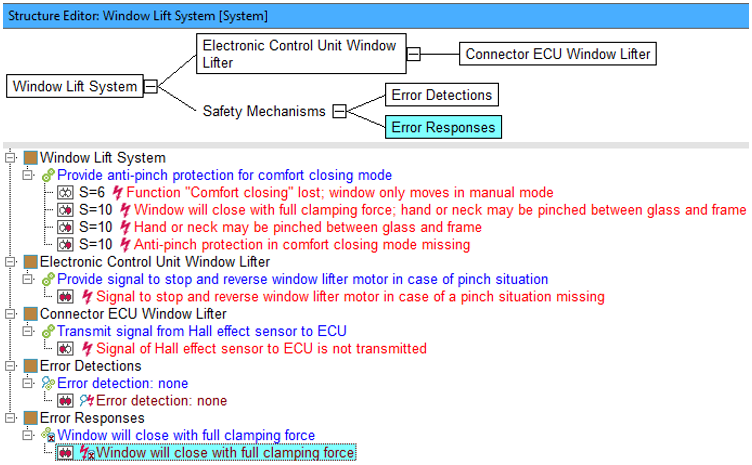 In this example, using the AIAG/VDA Window lift system, the failure “Signal of Hall effect sensor to ECU is not transmitted” has two unsecured failure effects: “Window will close with full clamping force; hand or neck may be pinched between glass and frame”  and “Anti-pinch protection in comfort closing mode missing”.

Because both top failures are rated S=10, they are listed in the upper part of the MSR form. If the S ratings are missing, the field for secured failure effect(s) remains empty.

In the lower section of the MSR Form,  a number of columns are reserved for the risk analysis (step 5) as well as for optimization (step 6), depending on how you select your display options. Above the selected cell “Current System Response“, you can see the icons

opens up a help page for MSR forms (using right-click). For an empty cell, the icon

indicates that an error response is needed there. For a filled cell, the icon

indicates that an error response exists here that also exists and is linked in a failure net but is not linked to a preventive action in the action group “Customer operation“. However, these links are absolutely necessary for these error responses to appear in the correct place in the MSR form. In the example, this applies to the current error response (step 5) “Window will close with full clamping force” and the error response still to be implemented (step 6) “Comfort closing mode disabled”.

If you do see the icon

in the cell “Current System Response“ but not the

icon , please use the context menu on the error detection in the MSR Form and select the option “Derive actions for customer operation” to create a link to a preventive action created during this process. If this is done correctly, the following icon will appear in the selected cell:

. At the same time, and the failure net link is responsible for this, an initial state is created for the direct cause of the error response, namely “Signal of Hall effect sensor to ECU is not transmitted”. This belongs to the action group “Customer operation” which contains the newly created preventive action.

The following are snippets from the Structure Editor and the MSR Form.

In the Window Lift System .fme example (download link at top of page), both safety mechanisms are linked to corresponding actions in Customer operation. These are “Error detection: none” and “Window will close with full clamping force“. To see this, make sure that “actions” is ticked in the display options for the Structure Editor and Failure Net Editor.

Finally, on the subject of “Data flow from existing FMEA into the MSR Form”, the following can be derived from the failure “Signal of Hall effect sensor to ECU is not transmitted” (listed in the upper section of the MSR form and from the failure net): The failure effect “Hand or neck may be pinched between glass and frame” occurs after the error response “Window will close with full clamping force” in the so-called secured failure path (which in our example is actually not secured at all, because there is only the error detection “Error detection: none“). The MSR Form has the column “Most Severe Failure Effect after System Response” for this purpose. If there are multiple failure effects (on the same level) with maximum S ratings, these will also be displayed in this column. This column stays empty if the failures have no S ratings assigned.

3.1 Data flow from MSR form into an automatically-created system structure

The following image gives an overview of how the data flows from the (initially empty) MSR form into an FMEA that is yet to be created (using the IQ-Software). The same example here is used (Window Lift System). The turquoise cell highlighted is “Current System Response” and its element will be the first entry in the FMEA. It must be an error response and in the image below you can see the synchronised element in both the Structure Editor list and the Failure Net Editor (automatically created by the IQ-Software). Why this is the case and why more IQ-Objects appear in the MSR Form than you have entered at this point is explained in detail in Chapter 3.2 below. 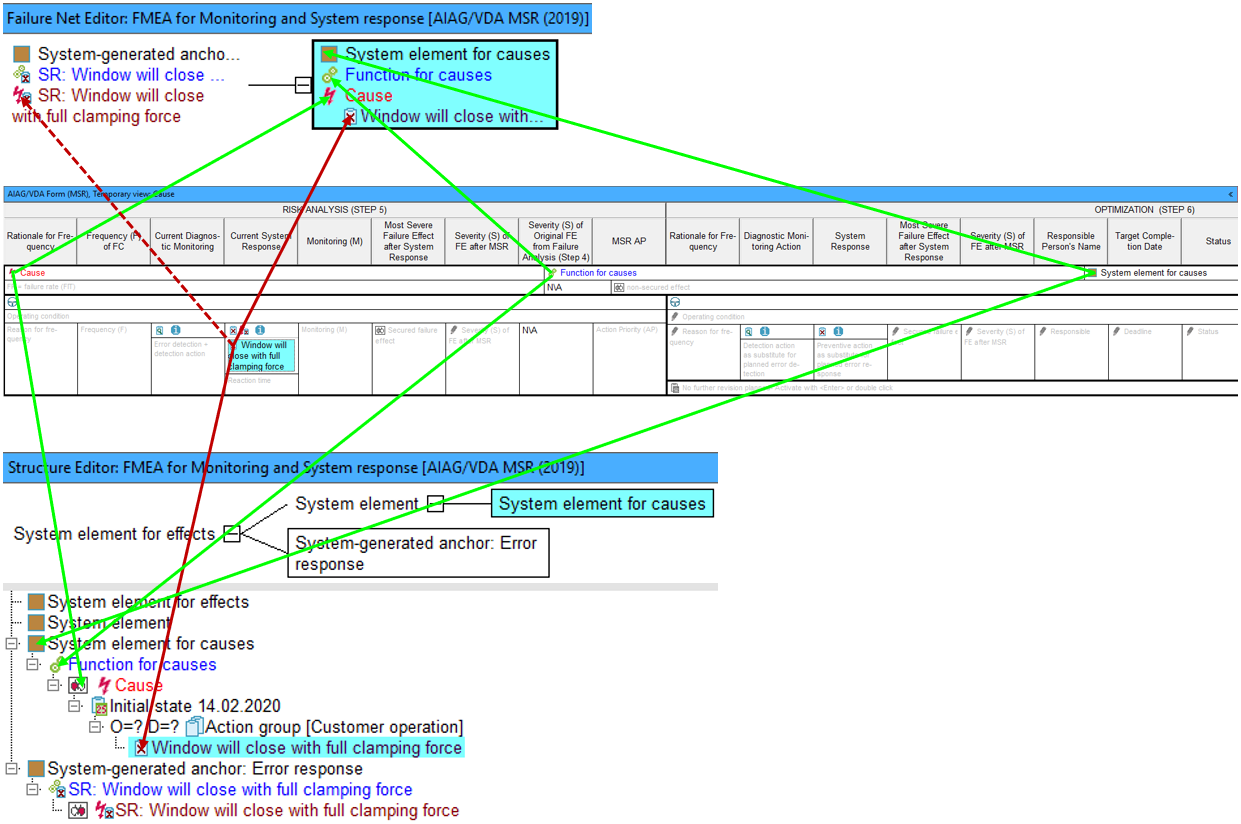 3.2 Explanation of data flow from MSR Form to the automatically created system structure

Using the example from Window Lift System, the safety mechanism to be entered into the cell “Current System Response” is the error response “Window will close with full clamping force”. Once this object is entered, the MSR Form looks as follows:

As can be seen, not only has an error response been created in the “Current System Response” cell, but also a failure “Cause“, a function “Function for causes” and a structure element “System element for causes” in the MSR form. This is more clearly viewed by switching to the Structure Editor as is shown in the following image. The header (in blue) also indicates that an FMEA for Monitoring and System response has been generated. This project is located under “project“, which can be checked in Project management (Menu | Administration | Project management).

In the case of directly entering an error response, it is important to note that actions in customer operation can be derived from safety mechanisms. This is explained in 2.2. Here, detection actions are created from error detections and preventive actions are created from error responses. These derived actions must be anchored to a failure cause, which can be better controlled by safety mechanisms (in terms of failure effects). Furthermore, IQ-objects are anchored in a particular way to each other; actions are anchored to failures, failures to functions, and functions to structure elements. When directly entering an error detection, these elements do not already need to exist within the file as IQ-objects, as they can be entered directly into the MSR Form as well.

When an error response is entered into the empty cell “Current System Response“, the IQ-Software automatically creates a preventive action with the same name. This action is stored in the action group “Customer operation” (which also gets created). In the Window Lift System example, the preventive action “Window will close with full clamping force” gets added to the action group “Customer operation” of the failure “Cause“.

The newly created preventive action is now anchored in the way depicted in the image above because the failure “Cause” is immediately followed in the failure net by the error response “Window will close with full clamping force” and the preceding error detection “Error detection: none”.

Another way to notice that the IQ-Software is deriving data once an error response is entered (directly into the MSR Form), is the appearance of the two icons

directly above the cell. However, there may be “indirect” entries in the cell for error responses for which no corresponding preventive actions (of group “Customer operation“) exist. In this case, the icon

will not appear.  See section 2.2 for more information on this case, as it is recommended to use the context menu command “Derive actions for customer operation” to create the preventive action. The same IQ logic applies here, whereby the preventive action is assigned the same name as the error response and if the action group “Customer operation” does not exist, it will be created.

With the information provided here, the image above (Structure Editor) should be almost self-explanatory. It should be noted though, that the automatically created structure is limited to three levels for reasons of clarity. In the case of the Failure Net Editor, it should also be clear now, why the IQ-Software creates certain linked elements when an error response is entered directly into the MSR Form.

The automatically created structure can be used when further expanding your FMEA using the IQ-Software. Multiple editors are available to you to view and edit your data in various ways.  You can also work directly with the MSR Form. Note here that by entering data here in other columns, further automatic creations of elements may occur.